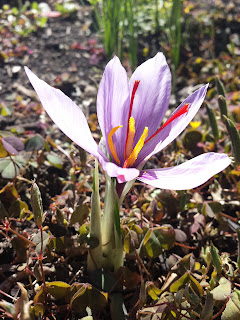 Saffron is usually known as the most expensive spice by weight, or a major ingredient in paella. But it is also used in Chinese herbal medicine. It's called Xi Hong Hua 西紅花(western red flower) or Zang Hong Hua 藏紅花 (Tibetan red flower), used when stronger effects are needed in place of the common safflower (紅花 Hong Hua).

I put in twenty bulbs last year (they were available at Lowes; i didn't even need to source them online) and would highly recommend growing saffron to anyone. Here are my reasons. 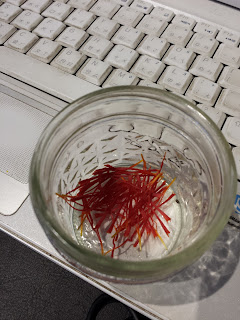 They are very cheerful. It's surprising to see flowers blooming in November. Lots of people commented on them. So it also works as a conversation starter.

They are very easy to grow. If you have them in the ground by September, they will flower on first year. They multiply readily. I harvest more than double amount of saffron this year.

Not to mention that they are a high-value crop. You would be expecting to pay $15-20 at the supermarket for a tiny envelope of it. The fresh saffron has a much stronger fragrance. I can't stop sniffing the saffron while they sat on my desk.

Grow Your Own Chrysanthemum Tea! 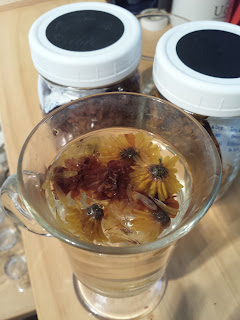 Chrysanthemum (菊花 Ju Hua) is a common Chinese medicinal herb, usually steeped into a beverage and slightly sweetened. Unlike most herbs, chrysanthemum actually TASTES GOOD. I served chilled honeyed chrysanthemum tea at our grand opening party couple years back. Some people actually asked for the recipe. You can buy tightly-packed dry chrysanthemum at the Chinese supermarket but it is quite easy to grow your own. And here's how. 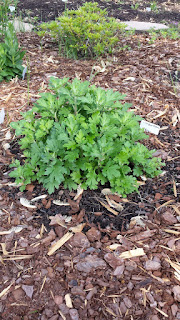 In late August, when the garden centers start to put the chrysanthemum out, buy a couple. They are cheap. People use them like disposable flowers but if you plant them, they will come back year after year. Plant them as soon as possible in full sun. The more time they have be become established before winter, the better chance they have. Ideally, they should be in the ground by the first week of September.

Do nothing for a while. Wait for them to die back with when the hard frosts and DON'T cut them back. Around Thanksgiving, cover them with 2-3" of mulch. 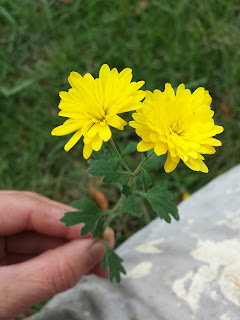 Pull back the mulch in March and check for new growth. They might be a bit tender at this time and can die back with spring frost. But by April they should be back. Now you can cut last year's dead branches, spread the mulch and fertilize.

Some people pinch their mums, but I don't and there are still plenty of flowers. When flowers are in full bloom, it's harvest time. They are so prolific. You can pick for half an hour and not put a dent in the display. 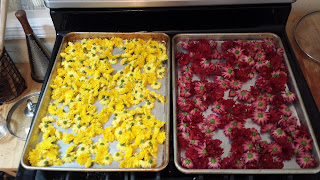 Clean the flowers by soaking them in water with a couple drops for vinegar, drain and rinse. Then dry them in the dehydrator or in a oven at the lowest setting. 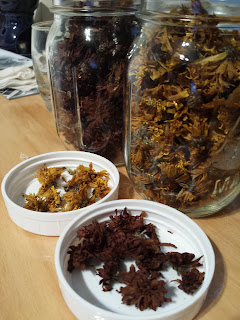 Store in jar. Traditionally, it's the white and yellow chrysanthemum that are used in tea. I've tried red and purple too. They do taste different and the infusion is slightly darker.